So, for all of our followers who were anticipating hearing about the rest of our trip home to Texas, I apologize for our silence on the blog.  We got home the end of September (about a month too early as it was still so hot!), but we were so excited to see everyone.  So, as it’s now a few months since these experiences, I will share some photos and stuff from several of our favorite stops on the way back to Texas.

When we left Washington, D.C., we headed south for Virginia.  Our original intention was to head to the east coast, but we got scared off by the hurricane coming up the coast.  So, instead, we headed further inland and ended up at Douthat State Park, VA.  It was a beautiful park and easy to get into.  Our site was 100 feet long!  It was like a runway!  Wish we would have stayed longer.

One of the things we really wanted to do while in Virginia was to visit Paul’s alma mater, Liberty University.  He completed an entire degree online, and had never visited the campus.  It was really neat.  The kids were pumped – especially Emily.  They were both ready to sign up and move in.  🙂 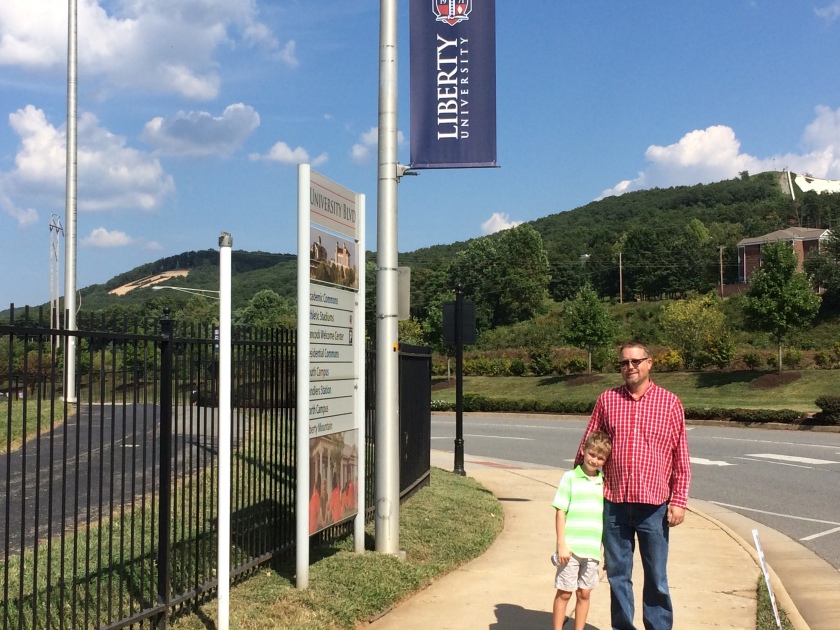 After our tour of the University, we visited the Appomatox Courthouse and McClean House, where General Robert E. Lee surrendered his Confederate troops to Ulysses S. Grant, signaling the end of the Civil War.  This was such a place of historical significance because it solidified the United States of America, the 13th Amendment, and the abolition of slavery in the Southern States.  It was fascinating. 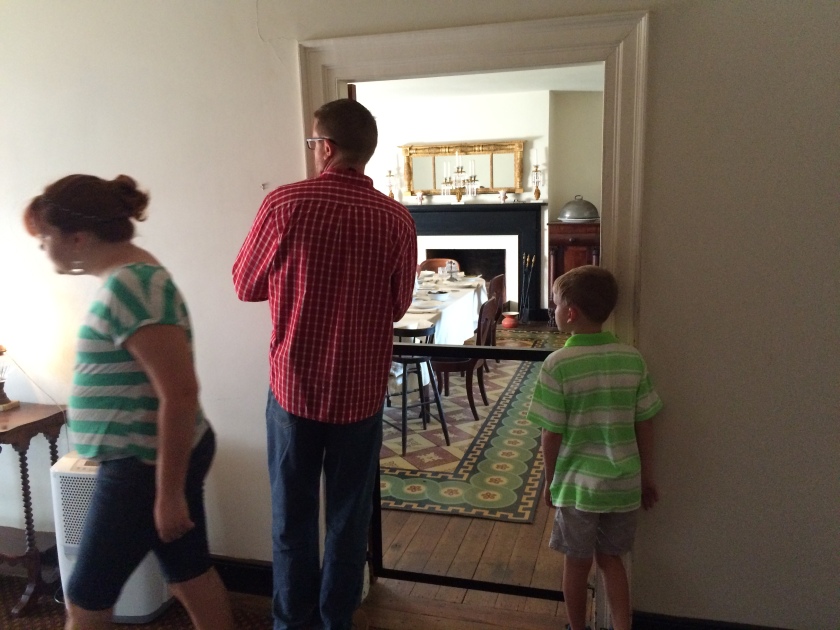 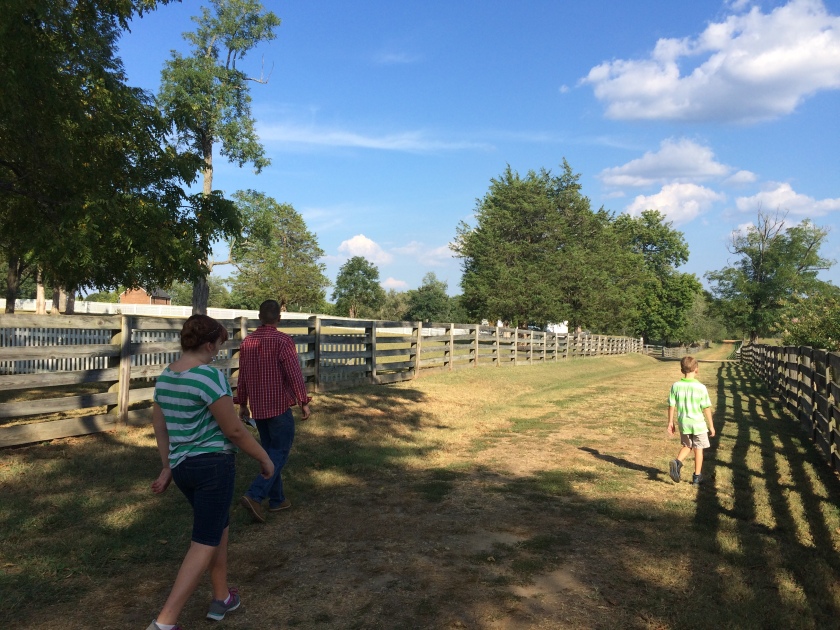 Loved, loved, loved Virginia!  Would love to spend more time there.  There is much more to explore and discover.  I love learning about all of the history in this part of the country.

When we left Virginia, the next leg of the trip into North Carolina didn’t go quite as planned. It was so beautiful.  Everything started out great.   We had hoped to put in a few more hours on the road than we normally do to get further and stay at our next destination longer.  Well, we won’t do that again.  4-4.5 hours is about tops for us.  After over 7 hours of driving through the mountains, up and down, brakes smoking, transmission and engine overheating, we went looking for somewhere to pull off.  Unfortunately, exhaustion took over and we made a poor choice of where we turned off.  We ended up stuck in a parking lot – a steep parking lot full of cars with no way to get out.  (Wish I had thought to take a picture in the middle of our panic.)  Several people tried to help us, but it wasn’t until we called for police help that we were able to manouver out.  The officer was so nice and completely calm, which we needed.  He escorted us down to an open street where we could compose ourselves before we continued on our journey. 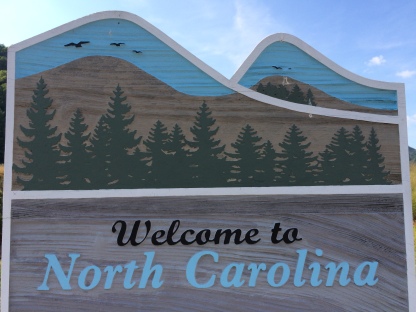 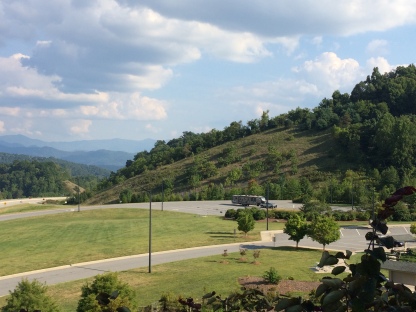 This was at the North Carolina Welcome Center. Beautiful!

Once we caught our breath, we decided to carry on a little further.  There was a Pilot about 30 miles onward, so as it was beginning to get dark, our plan became to boondock at the Pilot for the night.  Well, when we arrived, it was a very small one and all of the spots were taken.  So, at that point, we were like, “Ok, God.  What now?”  As we were pulling out of the gas station, we noticed a big, empty parking lot across from us surrounding a fireworks store.  There was already an 18 wheeler parked over there, so we joined him for the night.  It worked out just fine.  We fired up the generator and stayed cool and comfy all night. 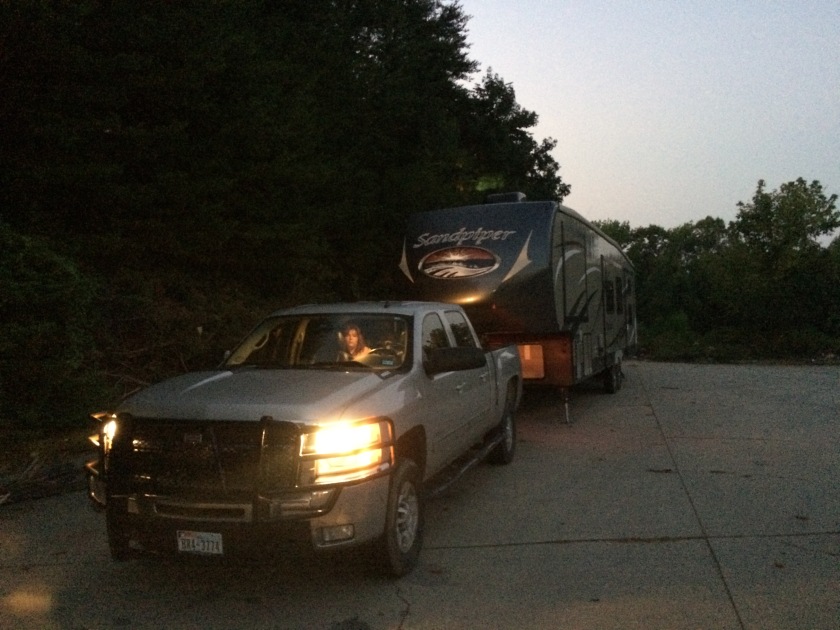 We got up the next morning and rolled out before sunrise.  There were several other trucks who had joined us over night.  I’m guessing that’s the norm since it’s directly across from the small Pilot.  We only had about 30 miles to go to the park.  We had reservations at Croft State Park, SC.  The roads getting into the park were pretty good.  We had chosen site 29 in the Lake View area for its size (it was the longest one).  What we didn’t realize was it was on a pretty steep incline and it was a loose gravel site.  There was no way we were getting in there.  Our tires were spinning like crazy and we were going nowhere, so we gave up and started down to make the loop around to head back up to the office.  The end of the loop was so tight with trucks and campers on every side.  With the help of fellow campers, we were able to get around and back up to the main road.  Everyone was very accommodating and helpful.  We were able to change sites.  It, too, was a little tricky to get into, but with the help of several park hosts, we made it, and extended our reservation so we could chill for a few days.  Several people came by throughout the day to check on us.  They were so friendly, and the site was beautiful!  I loved sitting outside because the leaves were beginning to fall.  It was really pretty! 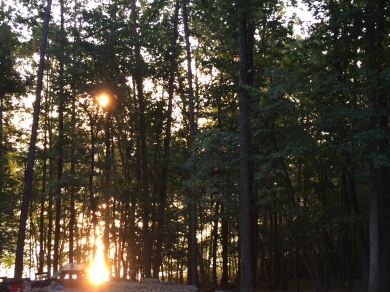 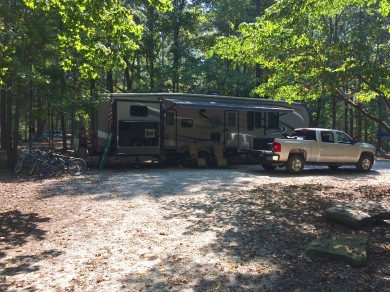 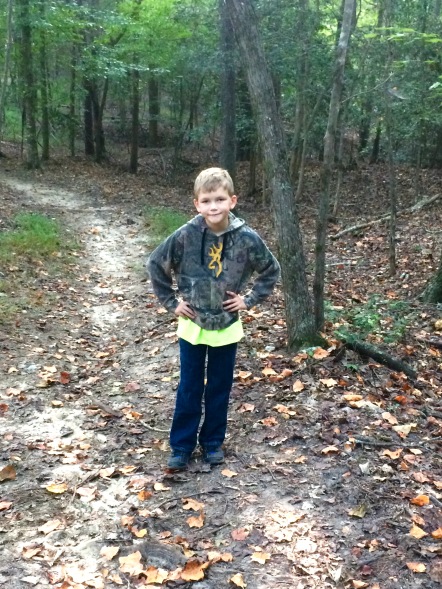 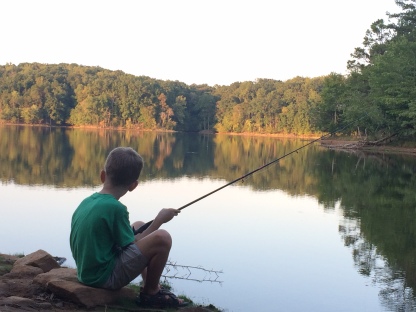 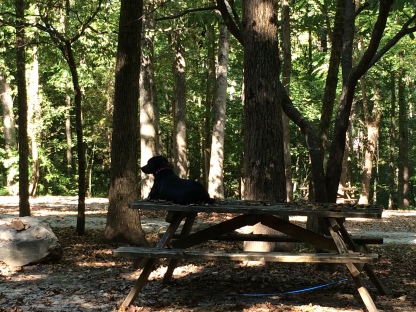 We LOVE State Parks!  You just never know what you’re going to get.  Some are super easy to get to and get in to, and some, no matter how much you plan and think you know what you’re getting, it’s just interesting.  We’ve learned to be very flexible.  All in all, I wouldn’t trade any of it.  There are stressful moments on the road, but it was stressful when our water heater in our house busted, or when we came home from vacation and our A/C had quit and it was 98 degrees inside the house.  We love this lifestyle.

The thing is…it’s all part of the journey.  With each trip, we learn new things, we meet new people, we see new places, and we learn more about our faith.  We have learned to fully rely on God for everything – our finances, our safety, everything.  People ask me all the time what we’re going to do next, or where we’re going next, and I tell them, “I honestly don’t know.  We kind of make it up as we go.”  That is the truth.  At the moment, we’re hanging out in my hometown of San Angelo, enjoying family, our church family, and a little bit of a routine.  We’ll be around this area for the holidays, but we are getting itchy feet….looking to where God will lead us next.