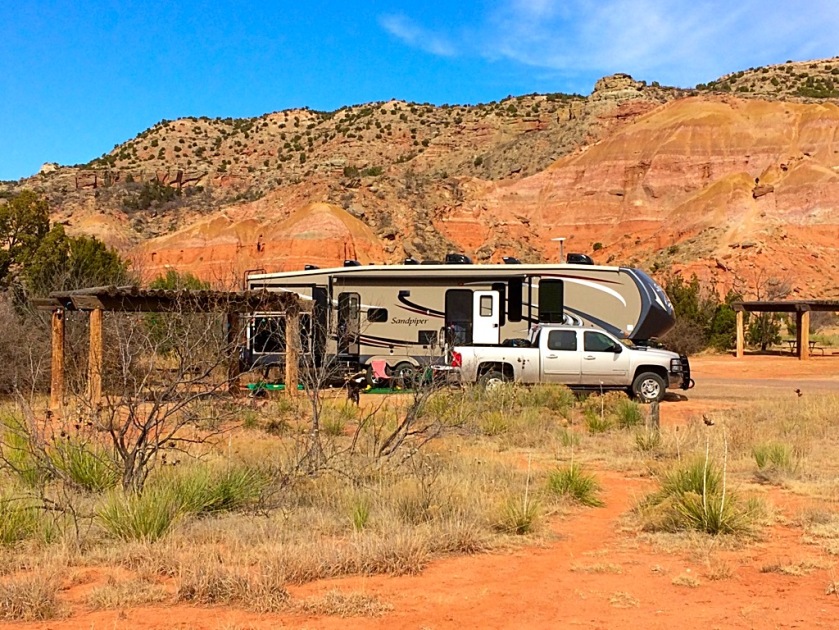 I have wanted to visit Palo Duro Canyon for a long time!  Did you know it is the second largest canyon in North America?

You almost think it’s a joke as you drive through mile after mile of flat, boring, ranch land. There is no way the pictures I’ve seen online could exist in such a place! The highways leading up to it consist of a fat-lot of nothing but flat fields and ranch land.

I have to say, I was very pleasantly surprised!  As we began to get close enough to see the rim of the canyon, it was breathtaking!  We had to wait in a substantial line to get in to the park, but it was a gorgeous Saturday afternoon and about 80 degrees outside, so not a surprise there were a ton of people trying to get in!  We were given the option of a campsite closer in, Sagebrush Campsite, which the Ranger referred to as “the retirement center”, but he assured me that if we were willing to drive all the way out to the Mesquite Campsites, we would not be sorry!  His advice did not let us down. The view from our site is incredible!  We were on site 94 and had a view from every direction.  I will say, the steep 10% grade downhill into the park is a nail biter with Our Moving House attached!  This came as a surprise to us.  We knew we’d be going down, but didn’t expect the steep route.  Note:  All campsites at this park are down the hill, as far as we know.  Was well worth it though!  You can reserve a spot and get more information here.  There are also cabins for rent if you aren’t traveling with an RV. 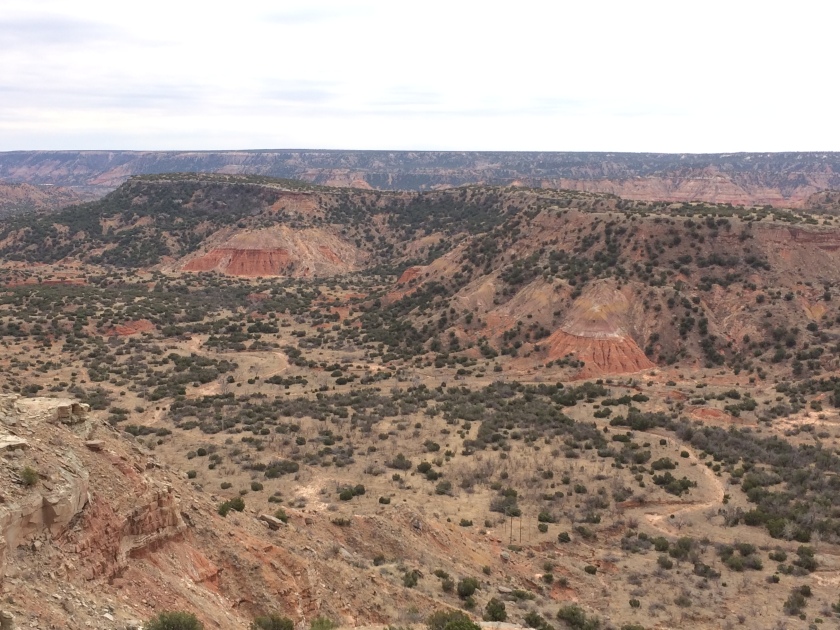 On Sunday morning, we woke up with the sun, Paul fixed us coffee, and we all did a little exploring (except for our 11 year old, Emily…she is not an early bird). The boys took off up a hill and I just roamed for a while, completely in awe of God’s creation. I always feel the closest to God when I am in His Creation, in the parts not tainted by human hands. I had so many thoughts going on in my head that morning, but that’s another blog for another time… 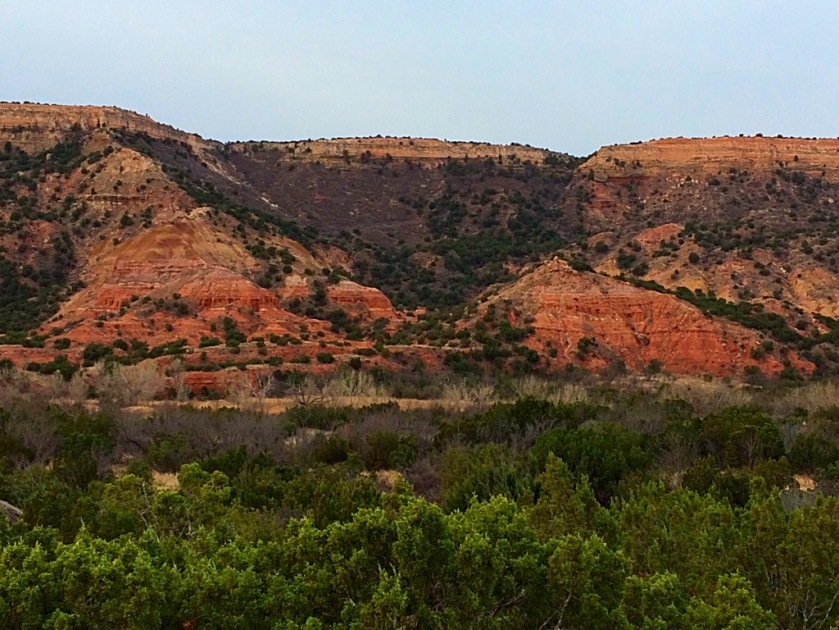 Once we got all of our exploring out of our systems for the morning, we came “home” and the boys fixed breakfast. I’m telling you, my 7 year old, Tyler, is the best egg cracker around!  He gets to crack all the eggs at our house!  I love the concentration on his face when he does it! 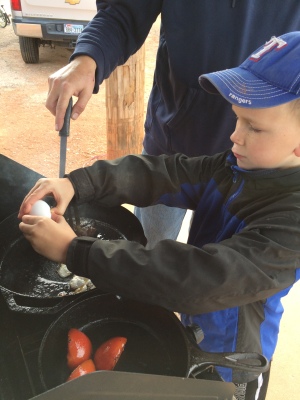 After breakfast, we headed into town (Canyon Walmart) to get some groceries, but we stopped off at the neat little visitor’s center in the park and checked out the scenic overlook. Took just a few pictures!  I love this one! 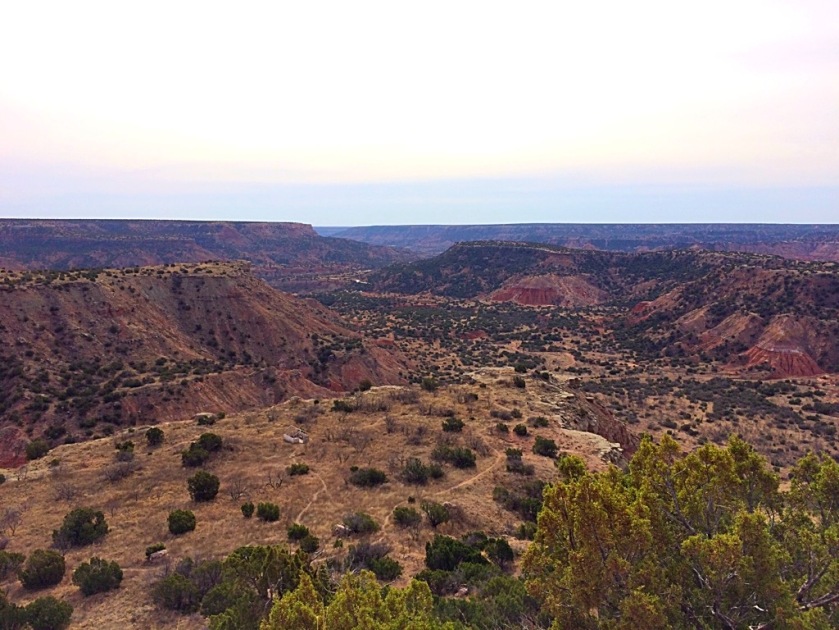 On Monday, we took a short trip to Amarillo and went to see The Cadillac Ranch.  So cool!  We had done a little bit of research and learned a little bit about how the iconic art structure came to be.  It was created in 1974 by a group of hippies from California, called the Ant Farm, on an eccentric Amarillo, TX millionaire, Stanley Marsh 3’s land.  The artwork, originally located on Route 66, consists of 10 Cadillacs ranging in year models from 1949 to 1963, half-buried nose-first in the ground.  When the cars were originally buried, they represented their original paint jobs and tail fins, but over the years, people began to etch their initials into them, smash windows, and vandalize them.  Instead of freaking out about it, this behavior was encouraged.  Today, as you walk up to the piece of art, the smell of spray paint hits you as visitors are leaving their mark on the remains of the cars.  We left our mark too, but you will want to take pictures because your mark will soon be covered by someone else’s!  Nonetheless, this is definitely something you want to experience!  Take some spray paint with you and maybe a Sharpie!  It is quite a sight, and it is totally FREE! 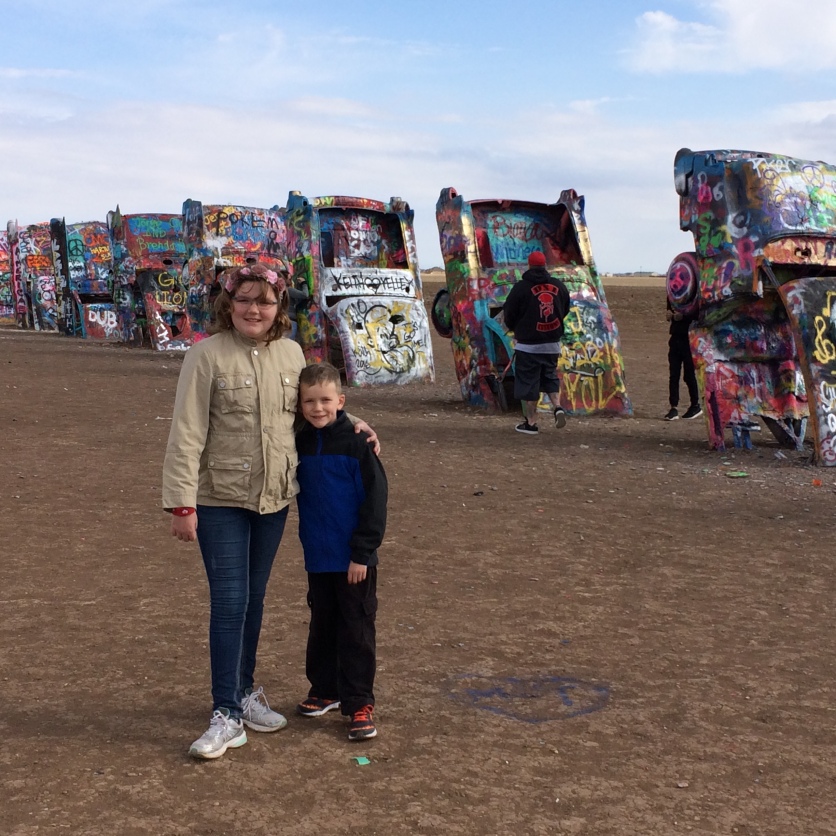 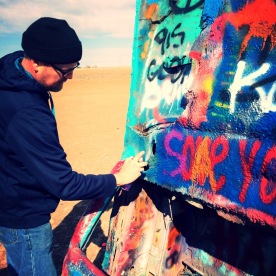 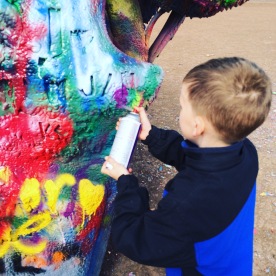 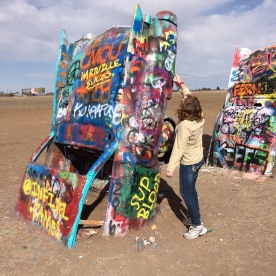 We also visited the Jack Sisemore Traveland RV Museum.  As full-time RVers, it was fascinating to see the evolution of RVs.  They had a rather impressive collection!  The oldest one they had was 1921 Ford Lamsteed Kampkar (pictured top right).  The museum is also FREE to visit!  Here are a few pics of some of our favorites!  I love how each one has a story, and you can actually walk into most of them and check out the interior too! 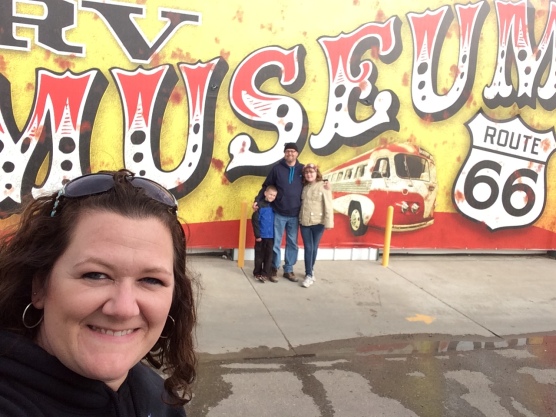 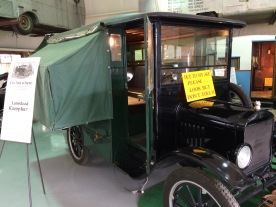 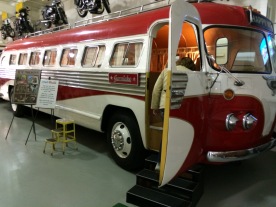 1948 Flxible The Bus used by the Gornike Family in the Robin Williams movie RV. 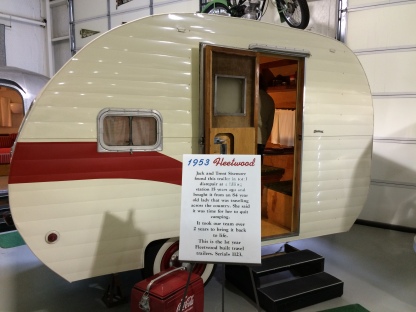 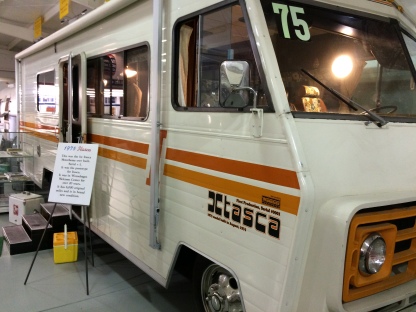 1975 Itasca. This Motorhome was owned by Max Factor. Jr., President of Max Factor Cosmetics. This particular one was the 1st Itasca Motorhome ever built, serial number 1.

On Tuesday, we visited the Panhandle Plains Historical Museum in Canyon, TX (approximately 12 miles from the park).  It was a great museum. They do a scavenger hunt where you collect stamps throughout the museum.  At the end, you trade your stamped card for a prize at the gift shop.  The kids loved it!  We had studied up on the history of the area, but at the museum, we learned all about the history and geology of the region.  Here are a few pics from our experience.  It is reasonably priced at $10/adult and $5/child under 12. 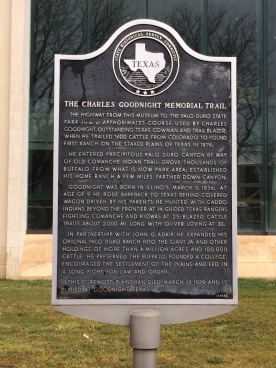 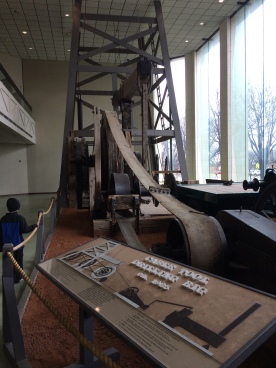 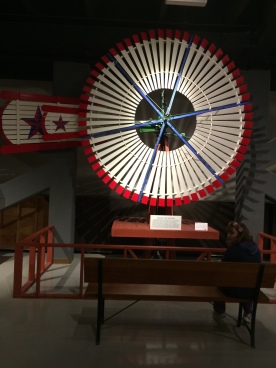 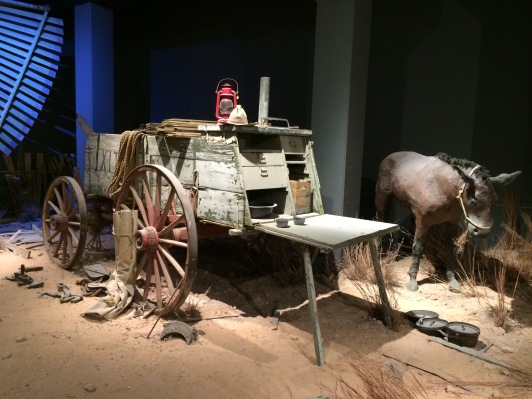 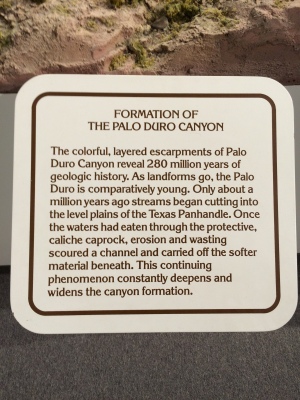 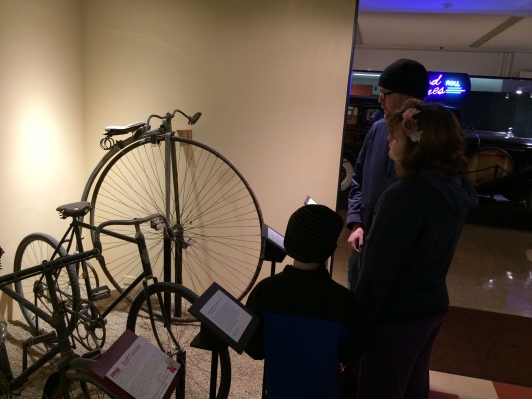 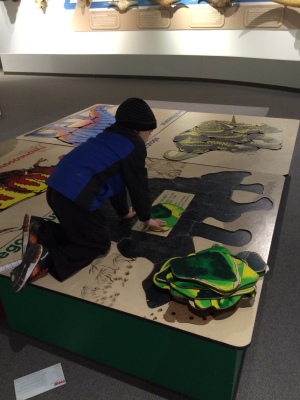 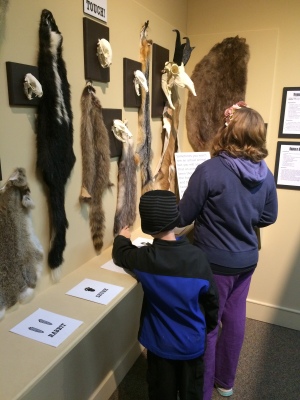 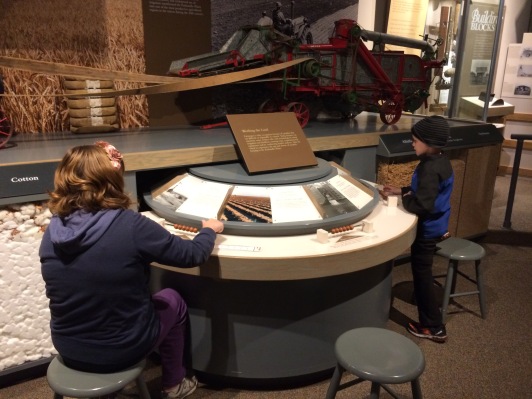 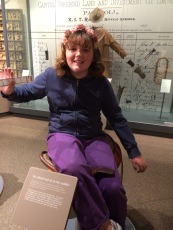 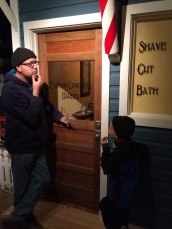 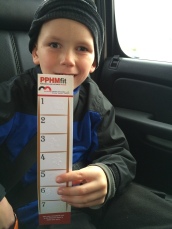 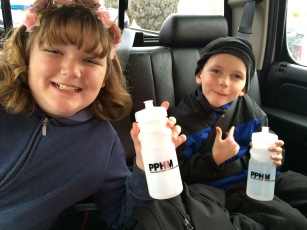 I wish we had more time to explore the canyon!  I would have loved to have done a few trails.  The weather got a little crazy on us though the last day or two with a cold front and rain.  They had forecast snow, but we found that down in the canyon, it is about 3-4 degrees warmer than on the plains above.  So, we only got the rain.  Next time….

We will definitely come back to this park.  In the summer, they do a play/musical called Texas at the outdoor amphitheater.  We will definitely be doing that!  I feel like there was so much more to see and do, but we just ran out of time!  ‘Til next time, Palo Duro Canyon….