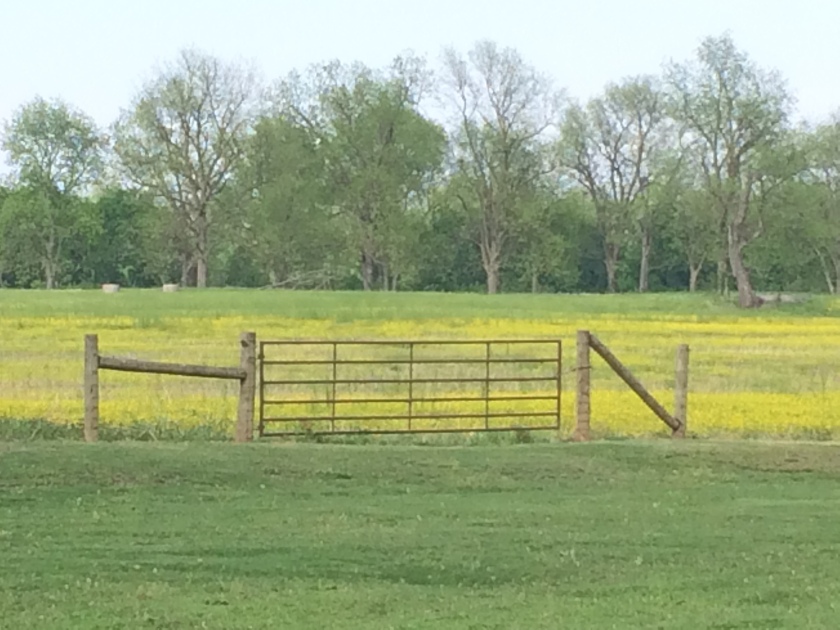 An adventure…that’s what we’ve been on since we left our home state of Texas last week. We have seen some beautiful country, and experienced things we’ve only seen in books or on TV.  We have been a little excited about it!  This photo says it all.  I keep just busting out into laughter when I have a reality check that we are dragging our home behind us across this incredible country.  We are truly living our dream! 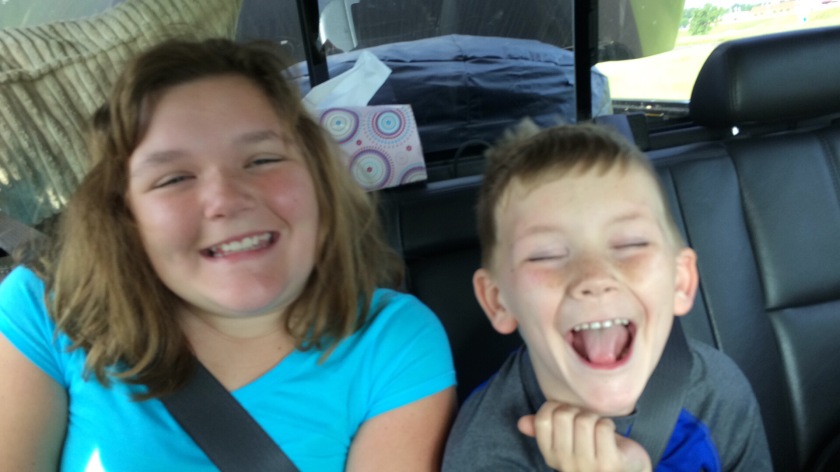 One of the best things about staying at state parks along the way is they are usually off the beaten path, so we get to see little towns, beautiful farms, ranch land, historical places, fields of wild flowers, etc. we wouldn’t see if we were just flying down the interstate. 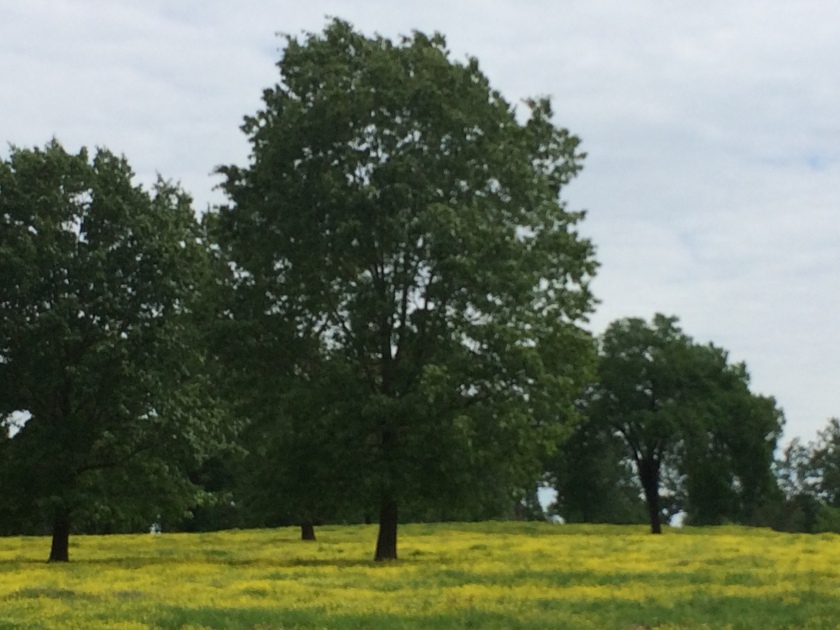 One of the worst things about staying at state parks along the way is some of those beautiful, winding, off-the-beaten path, country roads have given our truck a beating.  (More about that in the next blog.)  We also had our first little mishap with our trailer.  (Nothing too serious. Thank goodness!  Keep reading.) 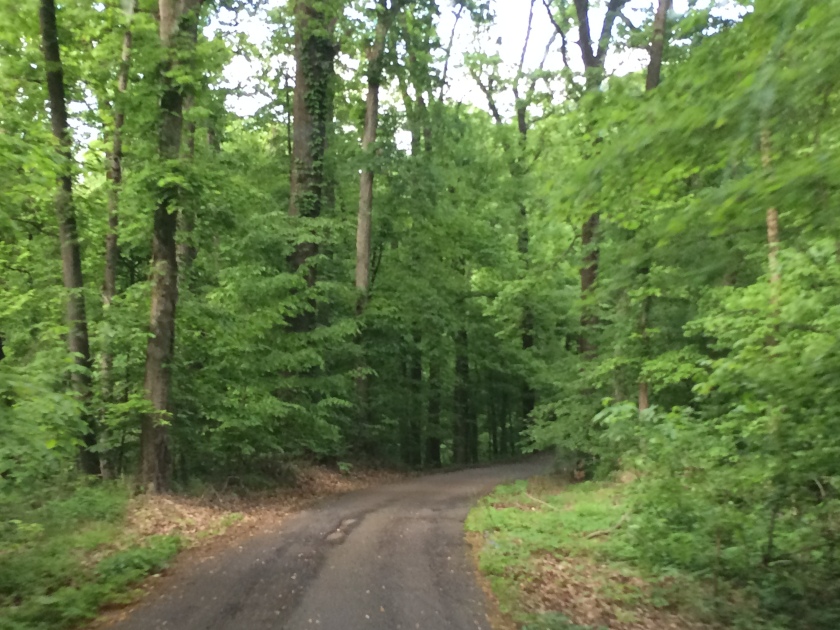 Our first stop outside of the Texas border was possibly one of our favorite parks to date…Crater of Diamonds State Park near Murfreesboro, Arkansas.  It claims to be The World’s Only “Keep What You Find” Diamond Site.  It’s the site of a 37 1/2 acre plowed field that is the eroded surface of the world’s eighth largest diamond-bearing volcanic crater.

We had a beautiful, huge site there.  It was so easy to get into (probably the easiest back-in site to date for our 42 footer).  The park was spotless, had a beautiful hiking trail, a nice playground, laundry facilities (which we took full advantage of), and full hook-ups.

But, of course, the most exciting thing was the day we got to mine for diamonds!  We learned how to dry sift and wet sift.  The kids and I had a blast.  It was a great excuse to play in the dirt all day!  We didn’t find any diamonds, but we sure found lots of pretty treasures including lots of jasper, volcanic lava, volcanic ash, calcite, and some sandstone. Once you’ve collected all of your treasures, they will identify them for you.  Tyler was excited to find calcite, which he remembered from the formations in the Caverns of Sonora. 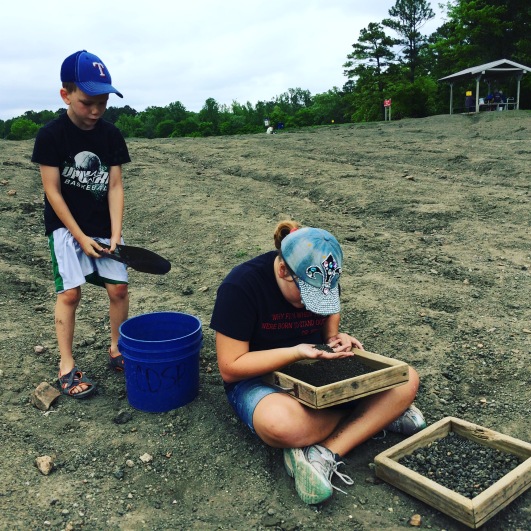 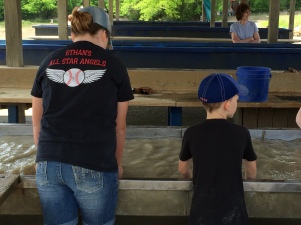 Along the way to our next destination, we discovered that one of our trailer tires was beginning to wear pretty badly.  (Not surprising after all the miles we’ve put on them.)  So, we decided to stop and have it replaced before having a blow-out on the highway.  All was good until we went to pull out of the tire shop.  As we pulled out, the back left side of the rig clipped a pole.  After freaking out for a minute, and doing some deep breathing exercises, we unhitched the truck and re-hitched it sideways so we could swing the rig out away from the pole.  Once we were out, we assessed the damage, and went into fix-it mode.  Thankfully, we carry every tool known to man with us!  Ha!  So, we got everything back together enough to continue on to our destination.  Once we arrived, Paul went to work on the repair and the kids and I went exploring. 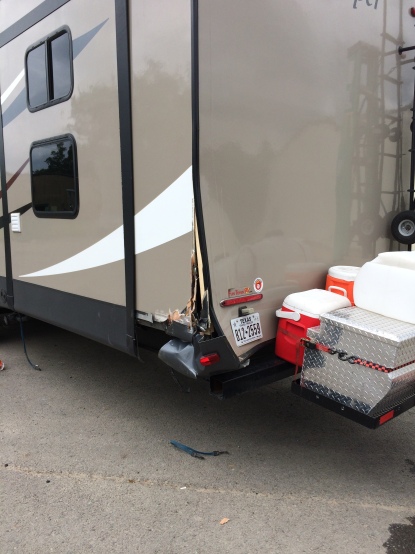 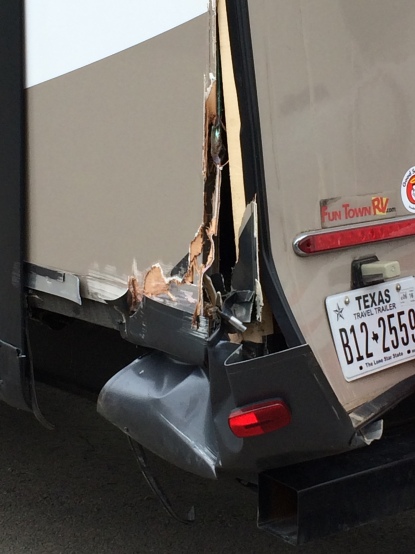 Our next destination was Jacksonport State Park near Newport, Arkansas.  In the 1800s, steamboats made this area a thriving river port.  This park contains the Jacksonport Courthouse which served as the home of county government from 1872 – 1892.  We were able to tour the historical courthouse, which today, holds exhibits sharing the story of the people and events which took place in this area.  It was fascinating and filled with history!  The town of Jacksonport was militarily important during the American Civil War, occupied by both Confederate and Union forces, and was where General Jeff Thompson formally surrendered the Confederate Army of Northern Arkansas to Union forces in 1865.  In the 1870s, the town was bypassed by the railroad, and rapidly declined soon after.  The courthouse has been used as everything from a school, a hospital, and grain storage over the years.

Jacksonport was a small park, but beautiful.  Our site was huge and right on the White River. We were camped under huge cottonwood trees. There was a beautiful trail just behind us that followed the river and was filled with amazing wildflowers.

Since there was no one else there, we let Tipper (our fur baby) go for a nice run.  She was so happy after being in the truck all day!  She loved the flowers too!

As the evening went on, the backend of our house was looking better and better.  Paul apologized around 50 times before the day was over, and we had a good laugh about it. Honestly, it could have been much worse.  We tore down walls and rebuilt a good part of our bricks and sticks house, what’s a little repair on our camper?  We just need a new skirt panel for it, and Paul says he’s going to design a new decal to cover the boo boo.

This was my suggestion:  I think we need a sticker like this that says, “Except for that one time!”  Ha!

The simple fact is, things happen.  Life happens.  Sometimes things don’t go as we planned or as we think they should, but God is always in control.  It’s all part of the adventure, and I thank God I’m married to a handyman!  🙂

And that, my friends, was our Arkansas adventure!  Stay tuned to hear all about our Tennessee adventures!  They were just as crazy!