Our first destination in Tennessee was the Meeman-Shelby Forest State Park north of Memphis.  Wow…So pretty…Those trees!  We’ve been stuck in West Texas for way too many years!  There’s a big, beautiful world out there, friends!

Getting into this park was a little challenging as we mistakingly turned into the south entrance, which if you were in a small car, would have been breathtaking.  But, in our rig, it was scary as heck!  There were lots of hills and tight spaces.  Somehow, by the grace of God, we made it through, and found the entrance to the campground.  If we had taken the north entrance, it would have been a piece of cake.  You can see the visitor’s center from the turn at the north entrance.  This is one of those things that it would be great to “know before you go”. 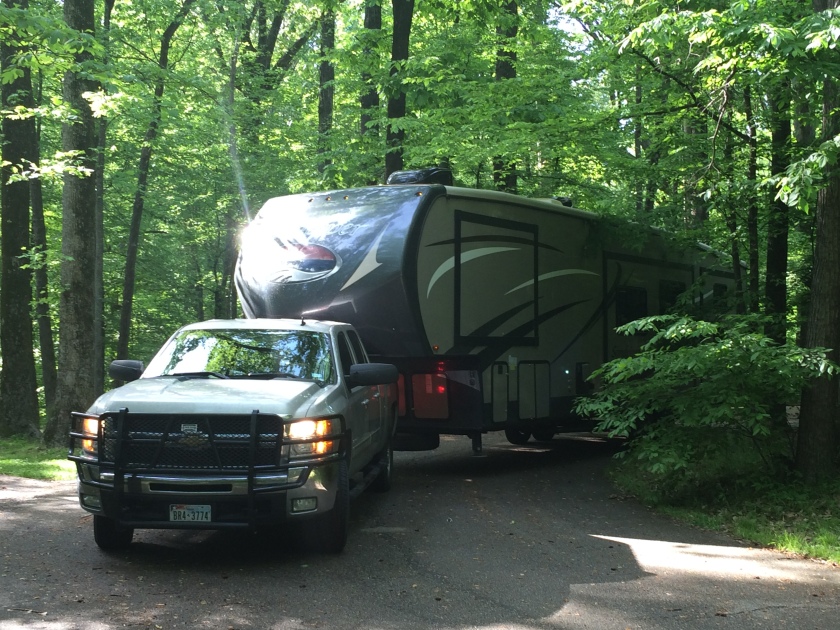 We made it in.  The original site we were assigned to was too tight, but there was a site right around the corner that was perfect.  We just called back up to the office, and they were totally cool with the switch.

I can’t tell you what it does for my soul to sit among the trees and breathe in the oxygen. It honestly gives me an occassional head rush.  After our little adventure through the south entrance, I needed to take a few minutes.

We were only at this park for one night, so we got set up quickly and went exploring.  We realized the park backed onto the Mississippi River, so we made our way down to it.  What a neat experience!  Emily said, “I’ve heard of the Mississippi River and read about it in textbooks, but it’s so cool to see it in real life!  It’s so much bigger than I imagined!” 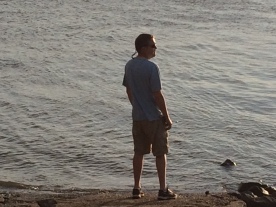 Tipper loved the water too!  She’s getting more and more brave.  Last summer, she didn’t want anything to do with the water.

We sat there and watched the sunset over the Mississippi, just trying to take in the vastness and the history that goes along with this place.  I found myself humming, “How Great is Our God.”  There are some things that we have seen and experienced along our journey that just send you straight into worship mode.  The more we see and learn, the closer I feel to the Creator.

By the time we got back to camp, it was getting late, so we got a campfire going, grilled some hotdogs, and got the kids off to bed.  Paul and I sat out by the fire just talking and taking in the day, when we had a little visitor come see us.  He never got too close, but close enough for us to snap a couple of pictures.  We’d never seen a raccoon in the wild before then.  We’re pretty sure we heard him around our site periodically throughout the night, but we made sure everything was put away before we went in.  I think he was hoping we’d left him a hotdog! 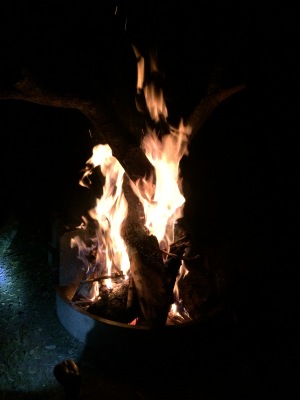 The next morning, we took our time before we left.  We were all pretty tired.  We finally got everything packed up and headed out for our next destination, Montgomery Bell State Park near Nashville, TN.

It was a really strange experience from the moment we got there.  We arrived at about 3:30, and the office wasn’t open for us to check in.  It didn’t open until 4 pm.  I had an email that told what site we were on, but we weren’t sure how to get to it.  We drove down through some of the park with lots of tight corners and narrow roads when it became pretty obvious that this campground was not intended for big rigs.  This would have been another one of those things that would be good to “know before you go”.  There were a few big sites, but they all seemed to be taken.  We finally knocked on the park host’s door, and she assured us we would fit through the tight turns needed to get to site 83, so we took her instructions and set out to find our site.  It was a definite “no go”.  At that point, we parked up in the dump station and waited for the office to open.  When it opened, she was a little more willing to offer us help.  We tried a few more sites, but it just wasn’t going to happen.  After a good while of up and down, back and forth, we called it, and decided to try to find somewhere else to stay.  She was really nice and gave us a full refund for the two nights we were supposed to stay there.

On the way back up the hill to get out of the park, our truck started having serious issues.  It was making an awful noise, and it took us three tries to get up the hill.  Paul was golden, and handled it like a pro.  I was a basket case by that point.  We finally got up the hill and went down to a large parking area to assess the situation.  At that point, we didn’t know what was wrong with the truck.  We took a view minutes to catch our breath.  The day was getting on.  We had pretty much decided we would try to make it to a Flying J Truck Stop about 14 miles away, stay the night there, and figure it all out the next morning.  Well, we got about a block from the park, and had to climb another hill.  The truck almost didn’t make it, so we pulled the rig over to the tiny shoulder of the highway.  We were stuck.  Traffic was crazy, and we didn’t know what to do.

Time to say a little prayer….

Then, God provided an angel in human skin by the name of Carrie.  She was checking her mailbox across from where we were pulled over.  She offered to hold off traffic while we backed up, and got up off the road, and up the street that went toward her house.  She later told us that she doesn’t check her mail very often, but just had a feeling she needed to that day.  Then, she saw us and realized why God had prompted her heart to do that.  Carrie was the hands and feet of Jesus that evening after a very long day.  We are so grateful for her willingness to help!

We managed to drag the trailer up the road and there was a little cut-out area where we could pull in and be off the road.  Thank you, Lord!  We got set up and settled in.  Thankfully, we are fully equipped to boondock, so boondock we did.  Our new friend allowed us drive up to her house, and fill up our extra water tank with her water hose.  She assured us we could do so as many times as necessary.  She was such a God-send! 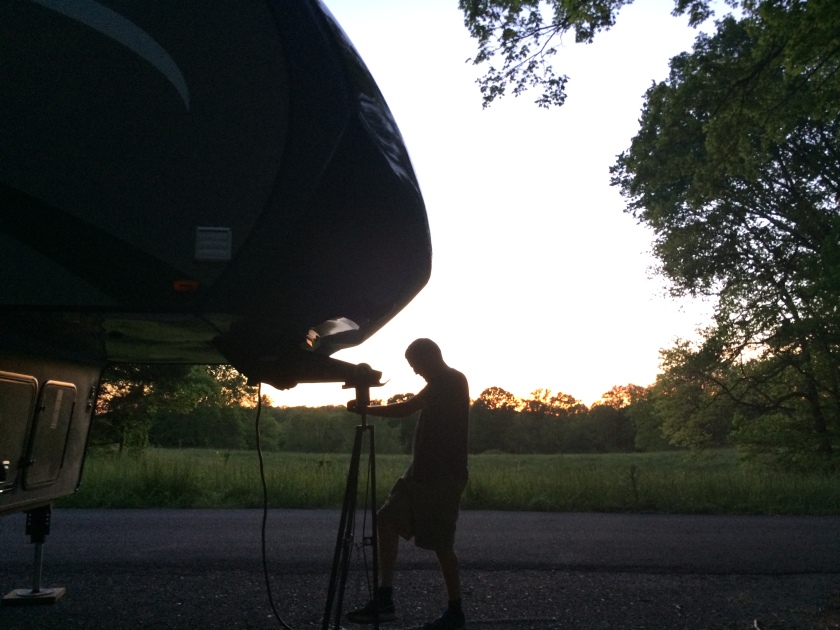 The next morning, Paul babied the truck to the nearest Chevy house, and they couldn’t look at it until Monday.  This all happened on Thursday.  So, he nursed it about 45 miles, to a city called Clarksville, and they were able to look at the truck then and there.

As it turns out, the little, rough, winding roads, and steep hills for all of these miles had taken their toll on the truck.  Not to mention, we’ve pulled our massive rig for a total of about 15,000 miles since we began this adventure last summer.  I think we found its limit.  The rear driveshaft and u-joints on the truck are shot.  They weren’t able to find the replacement parts locally, so they “over-nighted” them.  But, on a Friday, that means they will get them on Monday.

So, Monday it is.  We’re sitting tight in our little “cut-out” off the road.  Thankfully, the only things on the road are our new friend’s home and a farm at the end.  So, there is very little traffic.  It’s actually really beautiful.  I can think of a lot worse places to be. 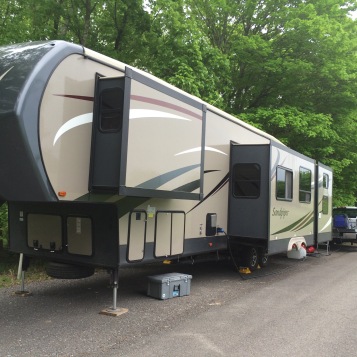 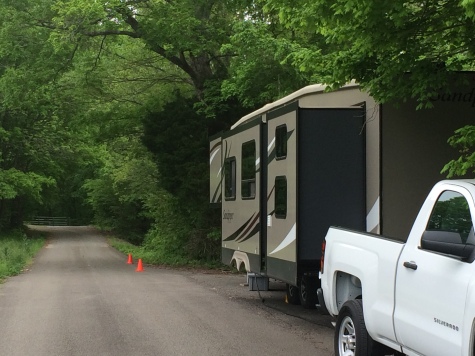 Paul got a little rental truck to get back from the Chevy house with our generator, and we are working away, counting our blessings that all of this went wrong at just the perfect time instead of when we were in the middle of nowhere, or on the interstate.

God never fails to protect us and provide for our every need!  It’s all a part of the journey. We were talking last night, and were reminded that we had disastrous moments in our bricks and sticks too…like when the hot water heater busted and flooded everything, or when we had termites coming through the wall, or the time the plumbing backed up into the showers.  Everyone has those kinds of things happen from time to time.  Full-timing comes with its surprises, too, but I still wouldn’t trade it!  🙂

Once the truck is repaired, we will be on our way!  We haven’t decided if we will divide the last part of our trip with a stop in Kentucky like we originally planned, or if we’ll just drive straight through to our destination in Ohio.  It’s nice to have a couple of days to catch our breath and think about it….the journey will continue!

4 thoughts on “Our Adventures in Tennessee”