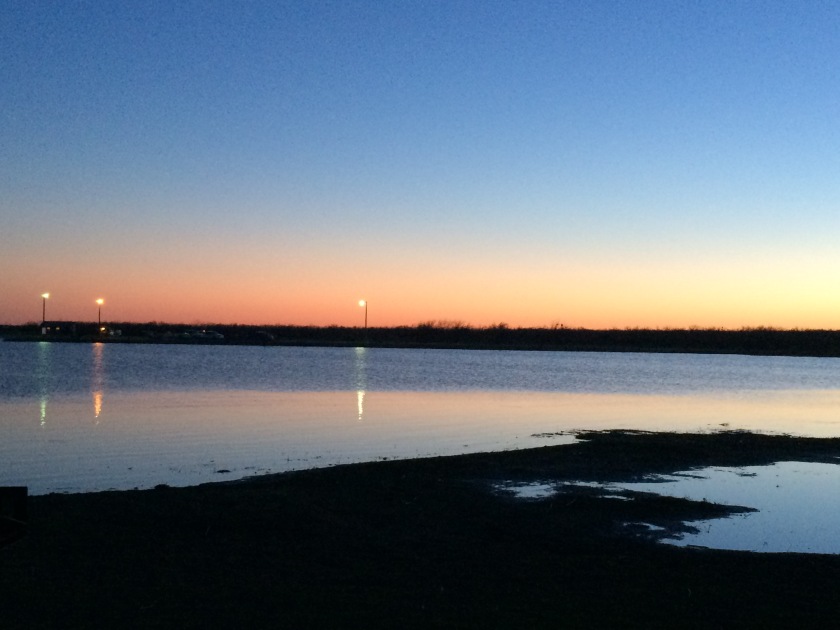 We claimed our home school Spring Break this week, March 14-18th.  What a great week. Unlike our Pre-Spring Break Adventure to Lake Brownwood, the weather has been gorgeous and we have spent every day playing outside!  We are at Lake Arrowhead State Park located just south of Wichita Falls, TX. 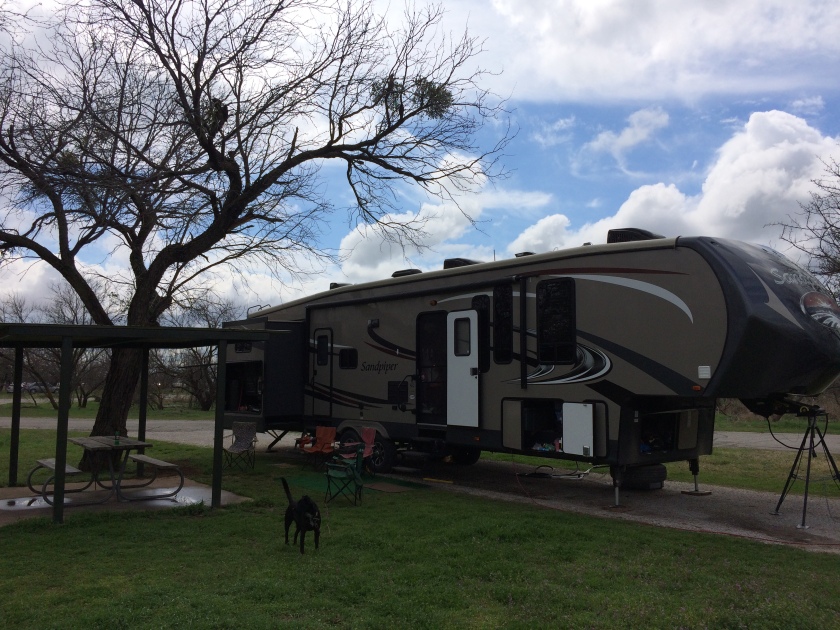 We have a great pull-through campsite #37, which we share with these adorable prairie dogs!  Tipper’s not really sure what to think of them, but she has been surprisingly unbothered by them for the most part.  She has lost 3 tennis balls down their holes though.  Oops! 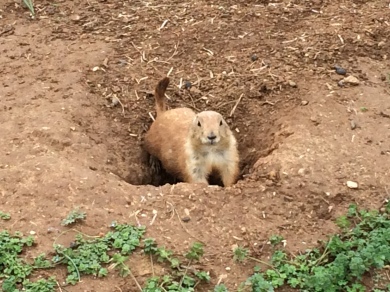 We are not camping lakeside.  The only sites that are sort of on the lake are water-only (no electric) and they are pretty small (more suited for a tent than a 42 foot 5th wheel).  The lake is only a short walk away from us though and it is beautiful!  Lake Arrowhead is completely full too!  (You probably won’t appreciate my lake level updates unless you’ve lived through the drought the state of Texas has been through the last few years!)

Please note:  There is a working pump jack in the middle of the park which makes quite a bit of noise.  If you are a light sleeper, you are going to want to camp away from it.  I would imagine sleeping in a tent could be difficult, although there are many tent campers out here.  Earplugs maybe?  Just make sure you check out a park map and plan accordingly.  You’re welcome.  🙂  Click here for a map of the park. 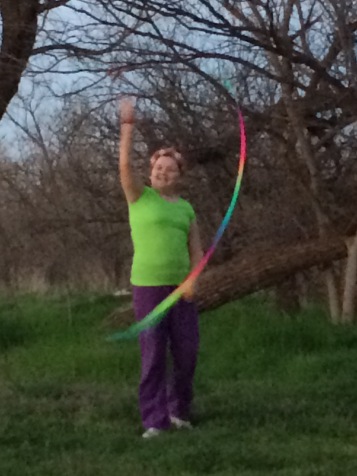 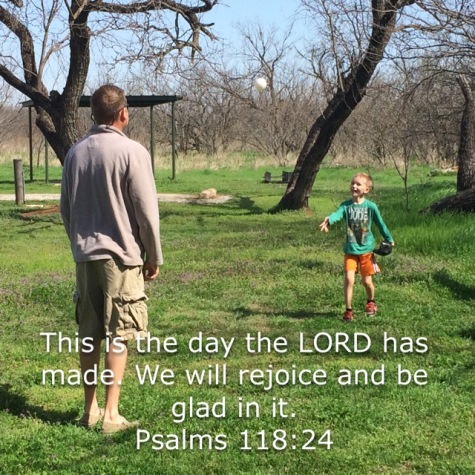 You an I both know that water is freezing, but they insisted on getting in,  and I happened to catch this really cool picture!  🙂

We even did a little fishing!  Notice I said fishing…not catching!  Ha!  We are terrible fishermen.  But, it was such a beautiful day! 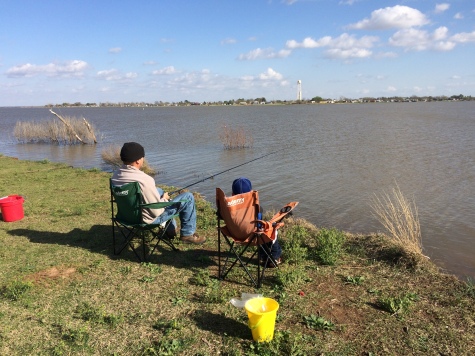 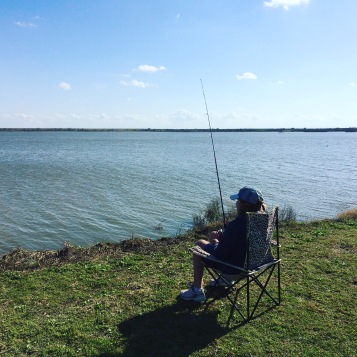 The kids and I ventured into Wichita Falls on Tuesday to get a few things and to check out Lucy Park that I had read about online.  We were not disappointed!  There is also a nature center there, but we were happy with doing the nature thing first hand.  I could have spent days roaming this park or curling up on a bench or swing with a good book.  There was a really cool duck pond area, tons of trails, and several playgrounds throughout the park. 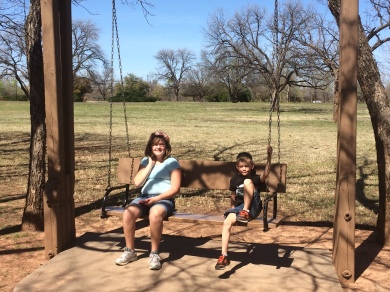 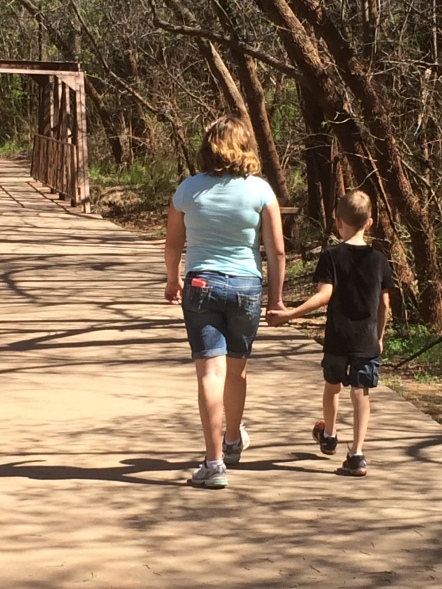 But, the star of Lucy Park was The Falls.  It’s about a half mile walk to them from the park entrance, but the walk is pleasant and well worth it!

Since it was Spring Break, there were tons of families at the State Park.  The kids loved that; especially Tyler.  He made friends with several kids on our circle of sites.  That is one thing that has been kind of hard for the little social man on the road.  He loves to be around other kids.  Over the winter, that was remedied somewhat by being close to home and family.  But, on the road, kids have been few and far between during the school year.  I think he got a little taste of what summertime will be like…kids everywhere!  He had so much fun riding bikes, playing tag, football, soccer…you name it!  They had a ball. Unfortunately, he took a spill early in the week off of his bike.  He has sported battle wounds on his sweet little face all week (although it has not slowed him down!)  After lots of kisses and cuddles, he was back up an at it in a couple of hours. 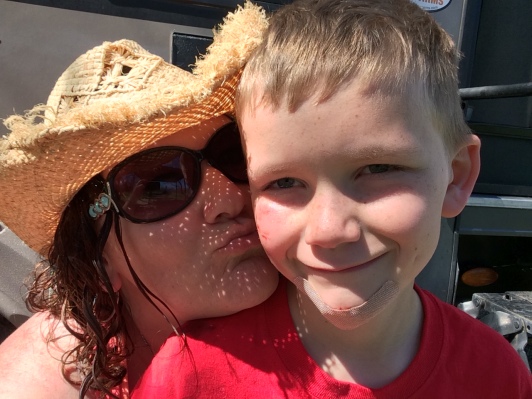 Tyler thought it was so cool that he made friends with another boy named Tyler and his twin brother, Trevor.  They traded addresses to stay in touch.  It was a little bitter-sweet when they left yesterday, but we sent them off in style with some homemade gum drops.

What a fun week!  Today is a little on the chilly side, so Paul and I are catching up on a few things and the kids are hanging out.  We head out tomorrow morning to our next destination.  It has been a great week with lots of memories made!  Happy travels, friends!